In the past month, we’ve celebrated my in-laws 60th wedding anniversary, my nephews were baptized, had a family picnic on the farm, had two family meals at our house, baked cupcakes for 60 – not once but twice, surprised my dad by flying my brother in from LA for his 60th birthday party and last but not least, hosted a four-course charity dinner at our home. To say I’ve been busy would be an understatement. But what fun it’s been.

A few pics to prove it all. 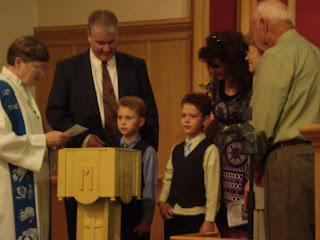 Dan and Brad getting baptized. 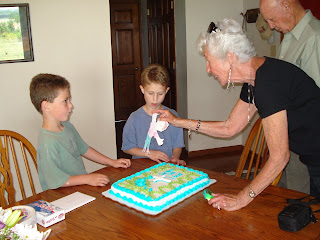 Randy’s Aunt Marsha getting the boys to pose with “Flat Stanley.” 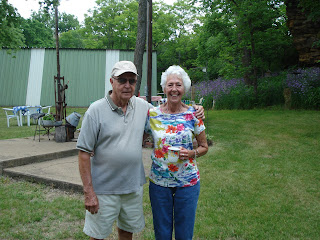 My father-in-law, Ronnie and his sister, Aunt Marsha on the farm. 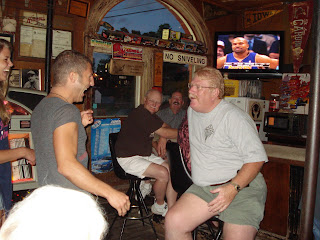 Surprising Dad with my brother Blaine. Dad cried he was so happy! We were at my uncle’s bar (my grandpa started it over 50 years ago). 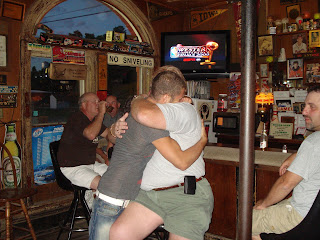 This was the sweetest moment! 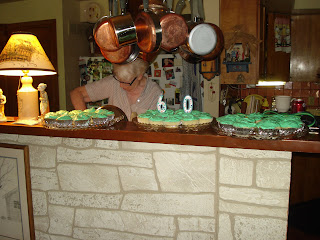 GG helped me make the cupcakes! 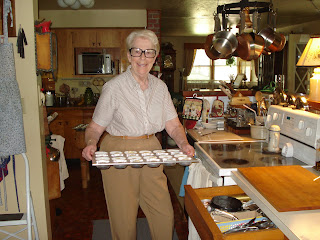 This was the first time I’d tried the Magnolia Vanilla Cupcake recipe – very yummy (recipe below). 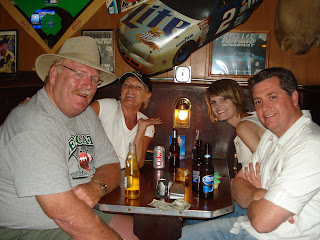 Dad with some of his good friends! 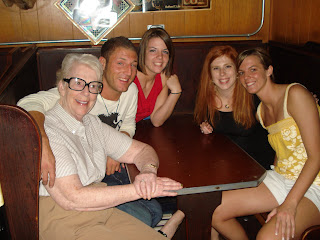 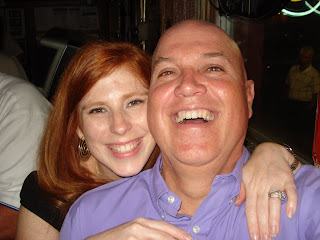 It’s impossible to have a bad time at Lefty’s!

And finally for the food portion of this forever long post. Surely you’ve heard of Magnolia Bakery in NYC, and if not, next time you go – stop by. Or just make these. They’re heavenly.

In a small bowl, combine the flours. Set aside.

In a large bowl, on the medium speed of an electric mixer, cream the butter until smooth. Add the sugar gradually and beat until fluffy, about 3 minutes. Add the eggs, 1 at a time, beating well after each addition. Add the dry ingredients in 3 parts, alternating with the milk and vanilla. With each addition, beat until the ingredients are incorporated but do not over beat. Using a rubber spatula, scrape down the batter in the bowl to make sure the ingredients are well blended. Carefully spoon the batter into the cupcake liners, filling them about 3/4 full. Bake for 20 to 25 minutes, or until a cake tester inserted into the center of the cupcake comes out clean.

Cool the cupcakes in tins for 15 minutes. Remove from the tins and cool completely on a wire rack before icing.

Vanilla Buttercream:
The vanilla buttercream we use at the bakery is technically not a buttercream but actually an old-fashioned confectioners’ sugar and butter frosting. Be sure to beat the icing for the amount of time called for in the recipe to achieve the desired creamy texture.

Place the butter in a large mixing bowl. Add 4 cups of the sugar and then the milk and vanilla. On the medium speed of an electric mixer, beat until smooth and creamy, about 3 to 5 minutes. Gradually add the remaining sugar, 1 cup at a time, beating well after each addition (about 2 minutes), until the icing is thick enough to be of good spreading consistency. You may not need to add all of the sugar. If desired, add a few drops of food coloring and mix thoroughly. (Use and store the icing at room temperature because icing will set if chilled.) Icing can be stored in an airtight container for up to 3 days. Since 2009, I’ve taught cooking classes out of my kitchen in our 1924 historic Mediterranean Revival home nestled in the heart of College Hill in Wichita, Kansas. My passion for entertaining comes … END_OF_DOCUMENT_TOKEN_TO_BE_REPLACED